As both a numbers guy and someone doing a newsletter for Aussies in the Bay, I’ve tried to work out how many of us are living here. I found a few ways to guesstimate but nothing definitive. Before I get into the methodology let’s layout where, exactly, the San Francisco Bay Area is.

So, what ‘counts’ as the Bay Area? This map from Wikitravel is the one I like to go by:

The key places are:

San Francisco Bay Area geographic definitions is a separate topic (locals love arguing about this one) but above is what we’re talking about here. The most reported definition are driven by the 9 counties on the Bay.

There are a two key ways I’ve found to estimate number of Australians in the Bay are by using LinkedIn and Facebook.

So far LinkedIn has the best data for working out how many Aussies are in the Bay Area. In January 2017, 4 days before , I worked out a way to use their search tool to get an estimate. Good thing I took screenshots then, 4 days later they updated their website and the method below stopped working.

Before they updated their site, you could use their search tool and use both geography, and university attendence as a way to generate a list of user profiles. The way the university parameter worked is that it got appeneded to the URL with a specific, numeric ID tag that represented any given university.

Turns out that these IDs were also sequential and matched the alphabetical order of the institute’s name. So once I had the first and last universities’ ID tags all it took was some Google Sheets magic to work out the rest (Google Doc here). By running that query LinkedIn spit out a result that listed the first ten profiles and also the total number of profiles for people who went to university in Australia and now live in the SF Bay Area: 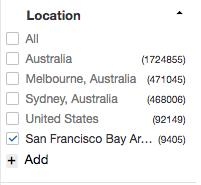 When refining the search I also found some other interesting data. LinkedIn would give you other options for narrowing the search results. I’ll share more in another post but for example, here are the institutes that Aussies went to in the Bay:

Not all Aussies go to university

So, some obvious caveats here. This data includes other nationalities who went to these universities and now currently live in the Bay, not just Australians. It also exlcudes all the Aussies here who didn’t attend university (or haven’t yet because they’re under 18), don’t have a LinkedIn, or who didn’t list their university on their profile.

So let’s try and work out what percentage of Aussies the 9,405 represents and go from there.

The number of Australians today who go to university after high school is around 25% (rounding down because the 36% figure in the article includes Tafe, which LinkedIn doesn’t). Historically, that figure is lower, so older generations are less likely to have been to a university. Then again, a lot of Aussies come to the Bay for tech and are more likely to have a degree.

When folks sign up to my newsletter I ask them what brought them here. Anecdotally, about 60-70% came for work, the other 20-30% married someone here or came with someone who is here for work.

Oh, and for other parts of the USA what were the LinkedIn figures?

Facebook has pretty sophisticated tools and datasets that allow advertisers to target very specific niches. They’ve done a great job of signing up users so I imagine that around 95% of Aussies in the Bay Area have a Facebook account.

Their geographic options don’t include “San Francisco Bay Area”, instead it’s broken down by places. So, to approximate, I dropped a pin on San Mateo and selected a 70km radius from there. I also kept the age range open, all genders, and limited it to English speakers. 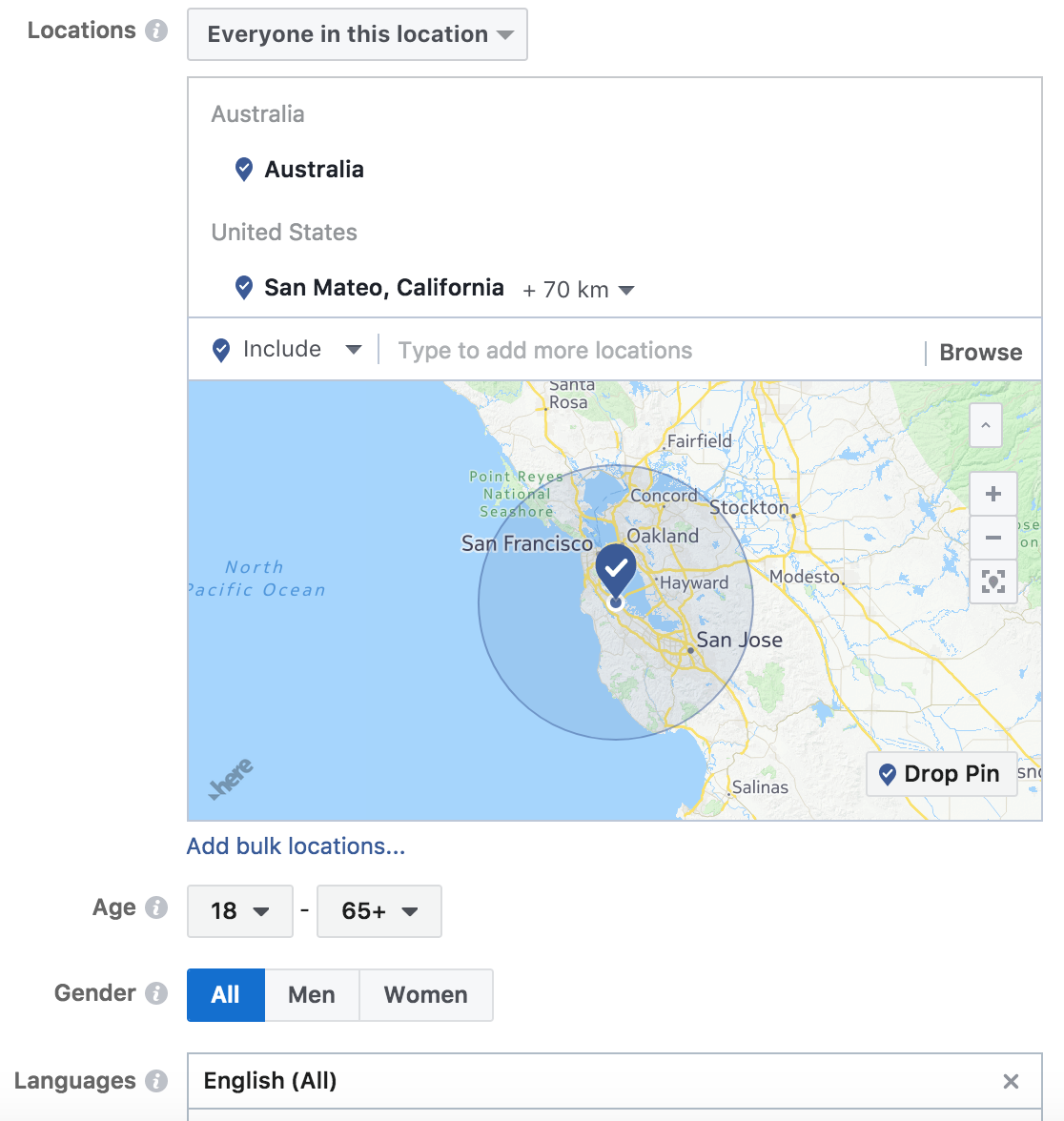 How does Facebook know I’m an Aussie in the Bay Area?

They actually have “Ex-pats (Australia)” listed as a behavior. That number you see above (1,373,606) represents how many people Facebook thinks are Australians living abroad in the world.

Yeah, but I didn’t tell Facebook I live overseas so it must be wrong

I’m not going to get into all the super smart and sophisticated ways Facebook knows you’re an expat. Let me just say this: all of Facebook’s revenue (>$9b a quarter at this point) comes from ads. They have buildings of PhDs and smart folks improving their ad tools. So yeah, they’ve worked out how to know who the expats are along with a lot of other things about you (probably by IP, usage patterns, etc).

So, Facebook is a bit broad here. Just because they know who the ex-pats are, doesn’t mean they pass along exact numbers to their advertizers. I’m pretty skeptical of their number, to be honest. If it is 90,000 then that implies that only 10% of the Aussies here are on LinkedIn. That, or the two tools have radically different notions of where the “San Francisco Bay Area” is (unlikely given both companies are based here).

Given the pervasiveness of the tech industry I find it hard to believe only 10% are on LinkedIn. 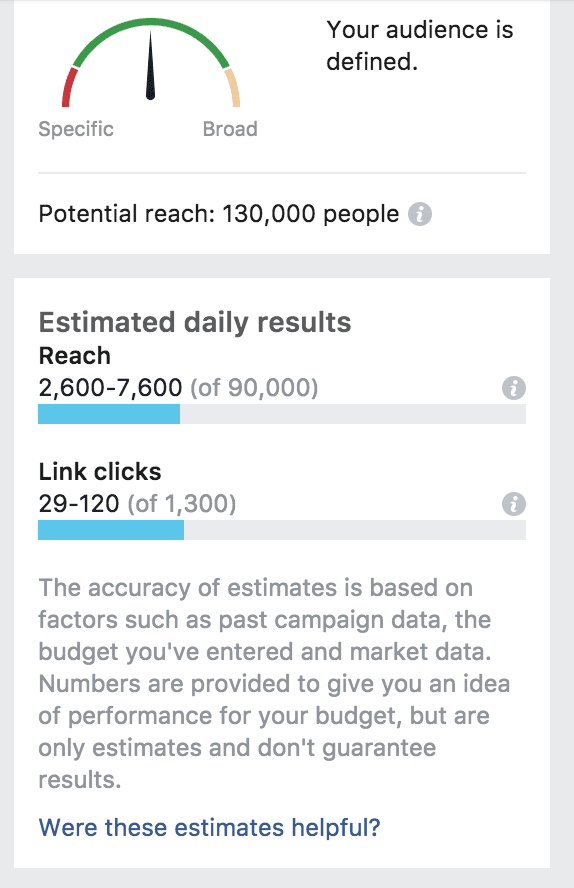 They also come with this qualifier: 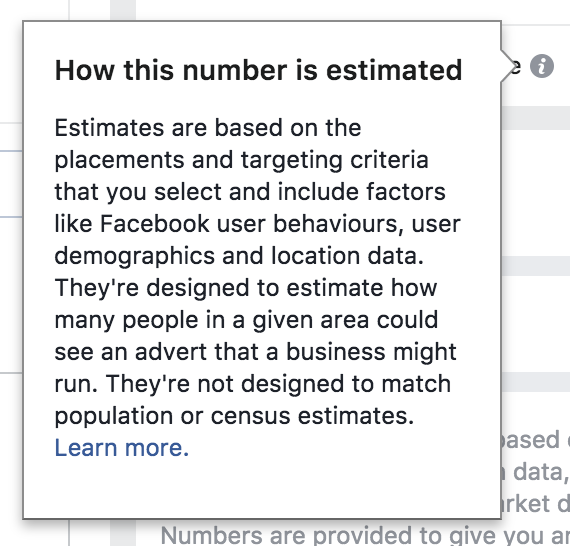 I’ll go with the LinkedIn figures on this one and my guestimation of % of Aussies in the Bay with a LinkedIn profile. By that logic, the figure is 018,810. I added the leading zero because, well, I’m a math guy and I like symmetry :).

What about government websites or other tracking? Know better ways to estimate? Think my figures are wrong? Tell me in the comments or ping me at chris@gdaysf.com. I’ll look add what I find here.

One thought on “How many Aussies live in the San Francisco Bay Area?”